I Made A Giant Resin Butterfly!

I love Monarch Butterflies and started working on this oversized piece of wall art last spring. I envisioned resin in laser cut wood as the perfect effect for life-like wings. I also 3D Modeled the body to take LED strip lights so the butterfly could serve as soft lighting. I couldn't be happier with how this came out.
Play Video

I used wenge wood for this project, and I began by prepping it to be re-sawed into two thin panels on the bandsaw. I added a rabbet to the edges of each panel to increase the surface area on the glue up.

Next, I loaded my two panels onto parallel bar clamps for the glue-up. Then I applied wood glue to the seam, squeezed the panels together, and added two clamps to either side. 12 hours later, I put the piece through the drum sander for one last sand.

At this point I had a large, thin, panel of wenge to work with on the laser cutter.

Then it was time to prep the file that would cut the wood panels into butterfly wings in Adobe Illustrator. I used a coloring page as my starting point here. Coloring pages are often great starting points, because they’re so high-contrast.

Next, I did some test cuts before cutting the wings because I hadn’t ever cut wenge before on a laser cutter. For test cuts you want to use shapes that are small, to minimize waste, but with a similar level of detail as the final piece.

When I thought I had it down, I set the laser to cut the wings. After the wings were cut one of them looked fantastic… and the other one didn’t make it all the way through. Not even close. At the time, I thought I could salvage it with the bandsaw and a whole lot of patience but I realized quite quickly that it was going to result in a very different look than the laser cut wing.

In an exciting twist of fate, I had more wood! So I decided to repeat the process in order to get a second butterfly wing that paired well with the first.

With two wenge wings cut and ready to go, it was time to think resin! I started with a batch of test pours using a range of alcohol inks. I also found pigments to add in to make the color more opaque. I compared my test colors to photos of monarch butterflies to nail down exactly what pigments and inks I wanted to go with.

With my colors ready to go, I started to fill in the wings by pouring one color at a time. Then I let it completely harden before going in with the next color. I did this to eliminate the risk of the colors running into one and other and marbling.

For some of the wing sections, I wanted a fade between yellow and orange. To do this, I split a batch of resin into two cups and colored one orange and one yellow. I alternated pouring each color, and then agitated the seam between colors with a stirring stick to blend them.

Once all the resin hardened I popped these off of the mold, which was a pretty exciting step; It was starting to come to life! I popped the wings on the drum sander for a few passes to pull off the excess resin.

Then I was ready to start the 3D model for the butterfly body. I wanted to install LED strip lights in the back of the body so the butterfly would light up. So after making a basic bug shape, I added cavities to snugly fit the needed electrical components, as well as small holes to add wire legs and antennae later on.

I 3D printed a first prototype and  realized that a few little tweaks were in order for the original 3D model. First, everything needed to be scaled up, I needed to adjust the size of the opening for the battery, I changed the position of the on/off switch, and forth I needed the light holes to be more shallow. I also decided to add an “insurance hole” between the two lights so that I could modify the circuit if needed because this was going to be a bit tricky to solder together in such a tight space.

The most time-consuming part of the 3D model was adding all the holes for the tiny wire legs, so I wanted to try out an alternative method for that. I heated up copper wire with a torch and pressed it into one of my 3D prints to see if it would stay in place securely. It did, so I nixed those leg holes for the final print.

Next, I double-checked that everything fit properly into the 3D print. Then I prepped my electrical components, LED strip lights, and wires. I wired the switch, lights, and battery together along with a charging port. While not the most elegant method, I simply used hot glue to insulate any exposed metal in my circuit, and I secured the strip lights with a five-minute epoxy.

Next, I set to finishing the wings. I sanded them up to a 220 grit using a random orbital sander for a nice matte finish. I used paint thinner to wipe off any excess dust, and then went in with a satin wipe-on poly for a luminous finish over the top of all sides.

Now it was time to paint the 3D printed body. First, I sanded down any rough spots. Then I covered the back parts with painter’s tape and added in my legs and antennae so that they would be spray painted black as well.

I started off with two coats of black filler primer. This will fill in the layer lines on the 3D print. The next day, I topped things off with a satin finish black spray paint because it seemed the most bug-like.

Then, since I intentionally designed the tabs on the wings to be trimmed down, I started trimming them until I had the perfect fit into the body. Next, I secured the wings in place using five-minute epoxy.

Finally, I prepped the butterfly to hang on the wall. I melted a hanger onto the back of the butterfly by heating the hardware with a soldering iron and then applying pressure to the 3D print.

The giant resin butterfly looked amazing in the daylight, but it looked even cooler lit up in the dark! 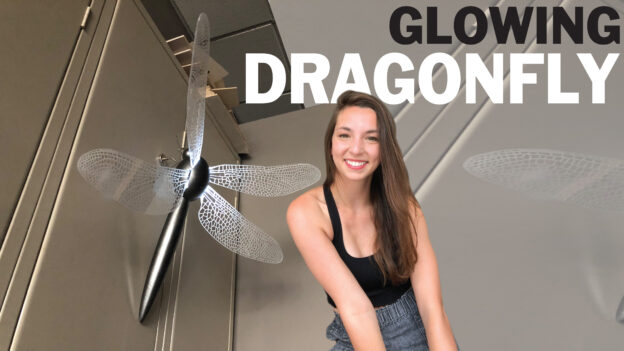 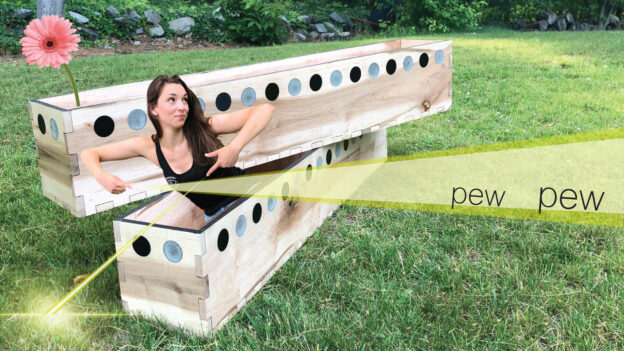